Yesterday, I had the pleasure of attending West Chester University’s 19th annual RECAP Conference with three of my colleagues from CCIT. The Conference was born in 1996 to share knowledge on the use of technology in the classroom. This was a time when educators were merely speculating about the distant possibility of communicating electronically with students and even posting course syllabi on that new-fangled World Wide Web, as West Chester president Greg Weisenstein pointed out in his opening remarks.

If you were following our Twitter feed (@AskCCIT) yesterday, you may have noticed my whirlwind of live-tweeting from the conference. Today, I want to go into more detail about some of the awesome tips and insightful wisdom that I gathered yesterday at RECAP.

Save time and improve feedback with dictation

In one session, Shannon Mrkich, English professor at West Chester University, demonstrated how she uses Dragon Dictation to speak her comments on student essays. The dictation software then immediately transcribes her speech into text. Her evaluation found that on average this process saves her 5 hours per stack of papers and allows her to leave much more detailed feedback to her students. Furthermore, in anonymous evaluations, her students communicated that dictated comments felt personal.

Now, Dragon Dictation is a paid software, but Shannon demonstrated that Microsoft Word also has built-in dictation feature that works almost just as well. In response to my query on Twitter, Jennifer Blackwell (@blackwje) pointed out that dictation is also available for Google Docs here.

I can’t wait to try this out next semester.

Social media presence matters, for you and your students

Next, Mary Beth Kurilko (@girlmeetsweb) of Philadelphia University offered some awesome tips for engaging students with social media while also training them to develop a positive social media presence. She pointed out that “we need a new definition of tech savvy”, explaining that just because millennials are digital natives doesn’t mean they are digital experts. Anyone who has tried to get students to upload work to an LMS or create a new thread on a discussion board knows what she’s talking about.

Among my favorite idea that Mary Beth shared was having students tweet about their industry.  This is so awesome because it requires students to research their industry, and could potentially lead to networking and employment opportunities. In a similar vein, Mary Beth sold me on the idea of faculty create a strong social media presence as well. So many companies are recruiting via LinkeIn and other networks, that a positive presence in your industry’s network will increase both your market intelligence and  you relationships with advisory committees. 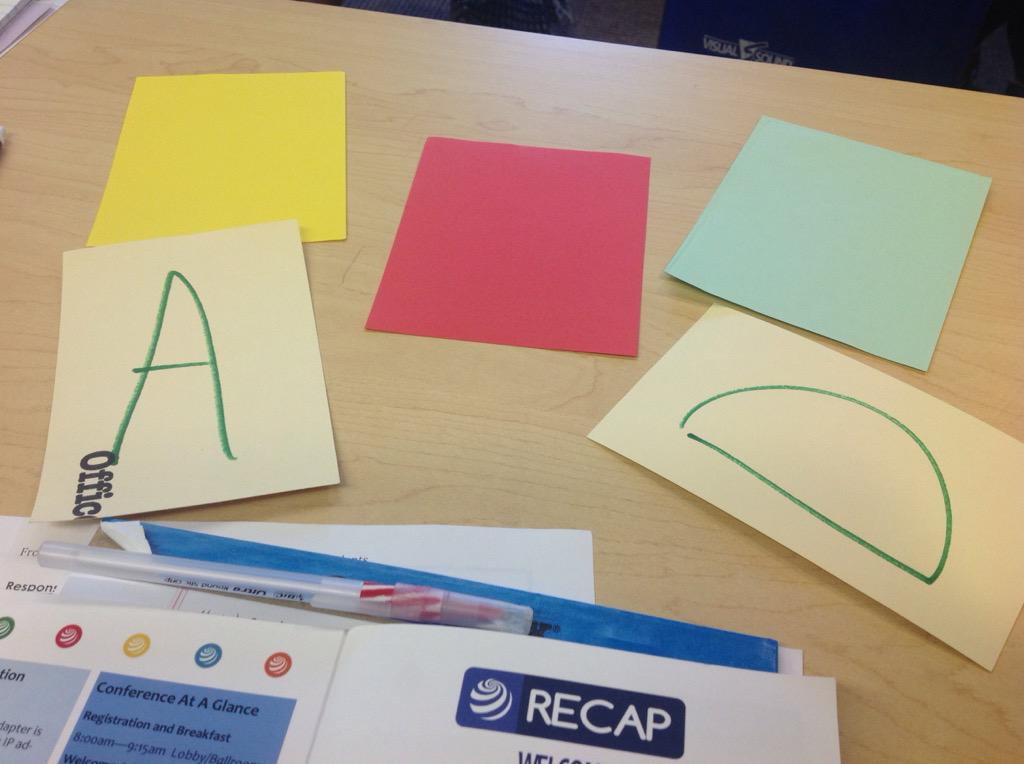 In a session run by Janet Josephson (@DrJJo) of Millersville University, we learned about the effectiveness of student response systems, from high-tech to no-tech. Janet shared some convincing research showing that students who participated in daily assessments using response cards performed better on weekly quizzes than students who did not use response cards.

In addition to her no-tech multiple choice response cards (see the image above), Janet also showed off Socrative and Kahoot, two response systems that students can access via a computer or mobile device. These are both fun, engaging ways to conduct quick, game-based assessments within class.

And speaking of games…

By the end of the keynote, we had interpreted clues provided by sticky notes hastily pinned to bulletin boards, match books dropped in just the right time and place, and strange informants slinking in the shadows–all without leaving the comfort of our conference room seats or putting down our coffee (which is ever-flowing at RECAP, by the way).

Among my key takeaways from Kapp are the following:

And my biggest takeaway, so important that I didn’t want to bury it in the bulleted list, is that stories sell. Teachers aren’t information dispensers anymore. Furthermore, we’ve got a lot of competition when it comes to millennials. That means that one of the new roles of the educator is to be a salesman. And stories sell.

Check out Kapp’s keynote slides and other resources at Kapp Notes.

There was more to RECAP, much more, but those are the highlights, and I’m sure that many of these ideas will be inspiration for a host of future posts as I work to put theory to practice. Stay tuned.